Pressed is a firsthand examination of the use and misuse of power and money often found in public/private partnerships.

The comprehensive review of the Lancaster County Hotel and Convention Project in Pressed takes apart the legal, political and civic fixings found in many of such undertakings. Pressed cautions others to take great care and be aware of the diversions, distractions and
deceptions dispersed in these endeavors.

The story is told from the vantage of someone, Commissioner Molly Henderson, who was there, as a sitting commissioner, who tried to stop the ill-conceived, risk-heavy, taxpayer-funded project before it was built.Henderson paid a price for her opposition.

In this video, Molly explains why she decided to document her story in ‘Pressed’.

“Molly Henderson gives us an inside look at the uses and abuses of power by the coalition of developers-media-industry-politicians forcing through an “urban economic development” project in her community. This is an important case study: a study scholars can use as an example of their theories of urban political economy: a study that common citizens can use to understand how local governments can and often do work at the service of the local elites.” Antonio Callari, Ph. D.

“A well written story that is a captivating page turner”

“Whether you know Lancaster County or not, Henderson puts details of this long and complicated story into a tale of intrigue that will keep you turning pages. Fantastic illustrations let you see the characters in this Shakespearean tinged story replete with quotes that fit the mood. This is a book for the scholar too, for the endnotes are there for you to learn even more about events and characters.”

“This book was a real eye opener.”

“Pressed is like Parks and Recreation meets House of Cards“.

“This is the real deal – if you have ever wondered how the rich keep getting richer – this captivating book reveals a blueprint for one of the shrewd schemes used by powerful and wealthy, and typically revered “community leaders” to scam Americans. This is a page-turning historical text that would also more than appropriate as a college course resource.”

“This fast-paced, fascinating tale of personalities, power and money in local politics is a compelling story. I couldn’t put it down.” Anita Cava

“No matter which side of the political plate you swing from, this book should be required reading by everyone in Lancaster County. Eye opening, affirming, and rather disturbing in its revelations, Dr. Henderson details what so many of us thought, yet had no focused resource by which to research and confirm. So much of this goes on right under our noses, and the lies of ‘true transparency’ smokescreen most to look the other way. This book should be read by any person interested in municipal planning, political science or true crime. Thank you, Dr. Henderson, for your outstanding efforts!” 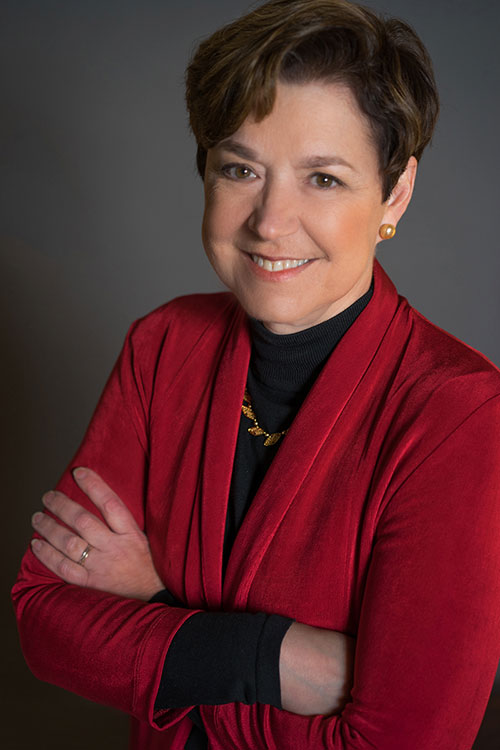 Why I Wrote Pressed

Molly Henderson served as a Lancaster County Commissioner from 2004-2008. She also served as Director of Public Health for the City of Lancaster, is a Registered Respiratory Therapist and has taught on the secondary and college levels. Molly holds a doctorate in Educational Policy Studies from Temple University and has concentrated in public health. She lives in Lancaster, PA with her family and two dogs, Gwen and Sophie.
More about Molly

Here are some examples of the kinds of resources

you can find in the Documents library 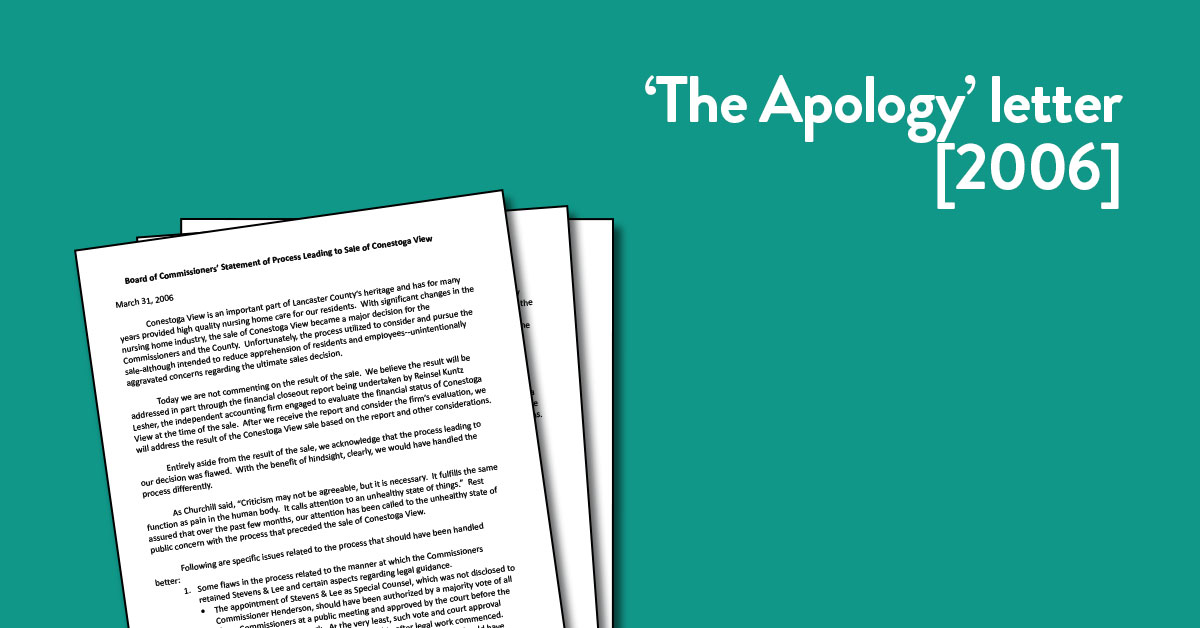 [2006] “The Apology”: Board of Commissioners’ Statement of Process Leading to Sale of Conestoga View

Lancaster County commissioners issue a statement, later known as ‘The Apology’ regarding the process leading to the sale of Conestoga View 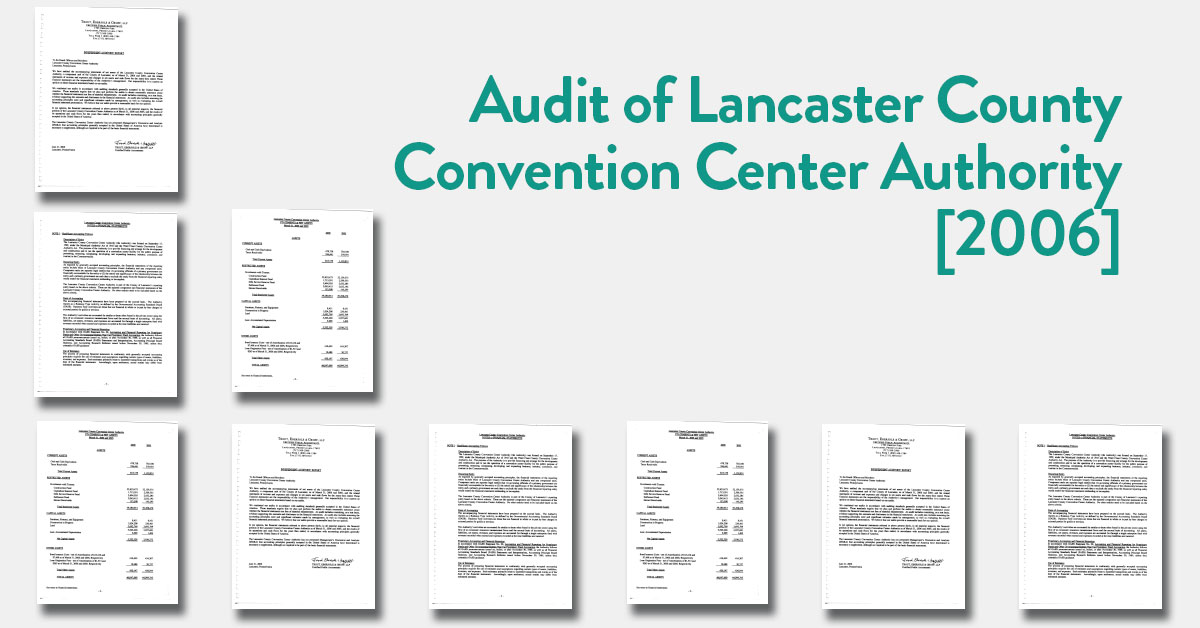 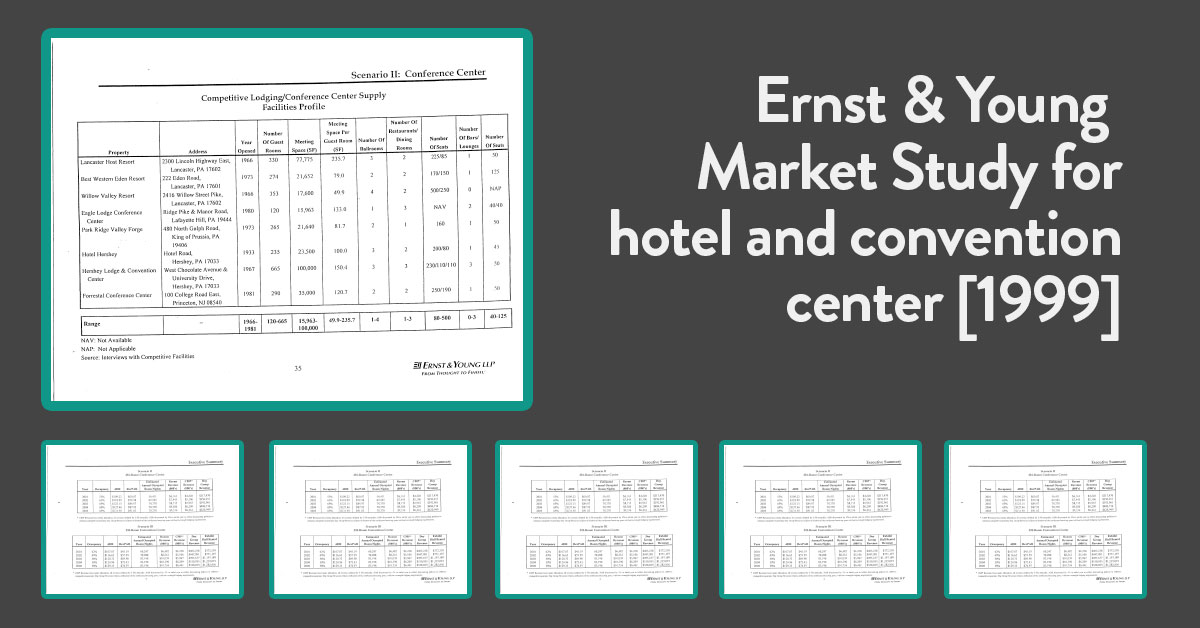 Many feasibility studies were performed over the duration of the convention center project. 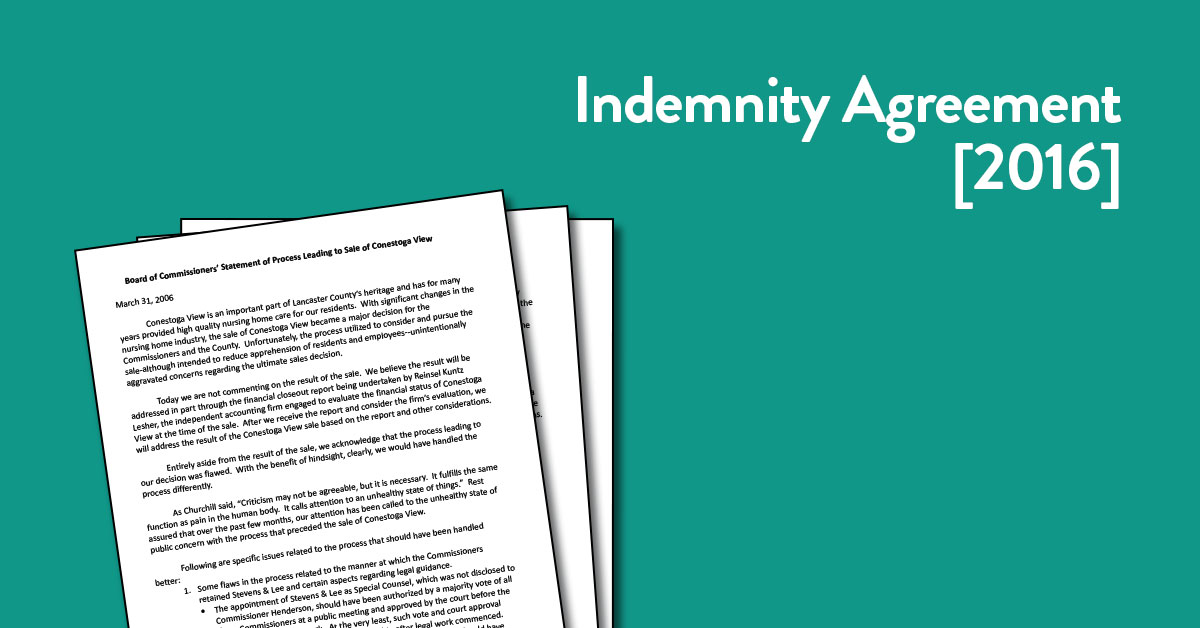 Indemnity agreement between Lancaster County Convention Center Authority, Penn Square Partners, and the Redevelopment Authority of the City of Lancaster.